Genshin Impact has seen some huge success already since launched last year end, but MiHoYo clearly wants a bigger slice of the pie in the gaming indutry. It’s rewarding players who manage to grow the game’s population with Mora, Primogems, in-game items and a few early-game Artifacts and level-up materials for those they bring in.

Check out the latest Genshin impact patch 2.0 to 2.1 which bring more fun & exploration to travelers to exlore in the game with new characters – one of them is Kamisato Ayaka which been the talk of the town since the beta game released. The wait is over now!

To get more new releases and promotion:

The official pricing for genshin impact top up is about RM 59.90 for 980 genesis crystal + bonus 110 without first time purchase bonus, and so on.

However for genshin impact lovers, we found one of the shopee trusted seller with as low as RM54.99 on Shopee Malaysia with official Google Play Reciept. They will provide purchase transactions details in case official deem that your top up is from illegal thrid party – which have causes a lot of fuss last time.

Besides that, official partner for Genshin Impact – Codashop is also doing top up promotion – 25% discount is fully redeemed! Stand to win your wish list. A total of 64 prizes are up for grab when you top up using GrabPay from 1 – 30 September. Kamisato Ayaka Brief Introduction:
“Inazuma Shogunate, Yashiro Commission, Kamisato Clan.” Widely known as one of the most distinguished clans in all of Inazuma, it is the branch of the Tri-Commission that manages ceremonial and cultural affairs.

Daughter of the Yashiro Commission’s Kamisato Clan. Dignified and elegant, as well as wise and strong. Since my parents passed, Brother and I assumed responsibility for all clan matters, big and small.

1. Ayaka’s Elemental Skill, Kamisato Art: Hyouka can deal AoE Cryo DMG to surrounding opponents. Her Alternate Sprint, Kamisato Art: Senho, allows her to move at high speed in the form of a torrent on water or ground. When Ayaka reappears, she temporarily receives a Cryo infusion.
2. When she casts her Elemental Burst, Kamisato Art: Soumetsu, Ayaka releases a long-lasting Frostflake Seki no To, a storm of whirling icy winds that slashes repeatedly at every opponent it touches, dealing Cryo DMG. Owner of Naganohara Fireworks. Known as “Queen of the Summer Festival,” she excels in her craft of creating fireworks that symbolize people’s hopes and dreams.
Fireworks are born out of people’s desire for light and beauty. The earliest mention of fireworks dates back to Liyue during the Archon War. Born from fire and embodied in stone and metal, they have since become an integral part of many festive activities in Teyvat. The Naganohara family has carried on this beautiful human tradition from generation to generation. It is rumored that in addition to the locally-made fireworks, fireworks made by Naganohara Fireworks were also used during Liyue’s Lantern Rite, adding an extra touch of splendor to the festival.

1. Yoimiya’s Elemental Skill, Niwabi Fire-Dance, converts her Normal Attacks into Blazing Arrows for a period of time. Blazing Arrows deal Pyro DMG.
2. Her Elemental Burst, Ryuukin Saxifrage, deals AoE Pyro DMG and applies Aurous Blaze to one of the hit opponents.
All Normal/Charged/Plunging Attacks, Elemental Skills, and Elemental Bursts by any party member other than Yoimiya that hit an opponent marked by Aurous Blaze will trigger an explosion, dealing AoE Pyro DMG. 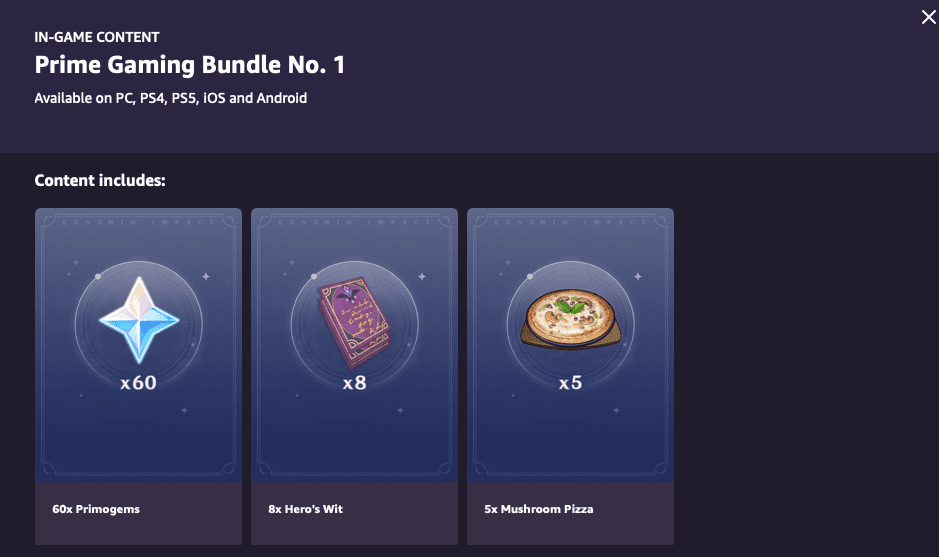 Our team member from Freebies4u found that some free claimable in game items including free primogem for gamers! You can claim the amazon prime gaming with free trial now and try your luck to get the most popular character in the game – Kamisato Ayaka – potentially every lad’s waifu and every ladies’ charming main character to explore the world of tevyat!

Good Things Come To Our Freebies4u Communities - If You Sign Up

Subscribe To Our Newsletter: Don't Miss Out Any Promotions & Deals

You have Successfully Subscribed!